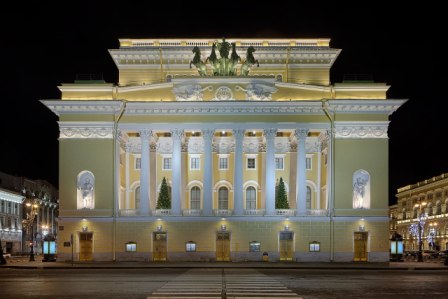 Alexandrinsky theatre is one of the oldest professional theatres in Europe. It was named in honor of Alexandra Fiodorovna, the wife of Emperor Nikolai I. On February 9, 1937, when one hundredth anniversary of Pushkin’s death was commemorated in Russia, the theatre was given the name of the poet and at present it is called Alexandrinsky or Pushkinsky theatre. The spectators’ hall provides 1,378 seats. The original fretwork of the tsar lodge has survived up to the present days. The marvelous acoustics of the theatre hall is especially remarkable. The Troupe of the theatre is one of the best theatrical teams in Saint Petersburg. Such outstanding stage masters as V.Komissarzhevskaya, V.Meyerhold, B.Freindlih and others performed in the theatre.