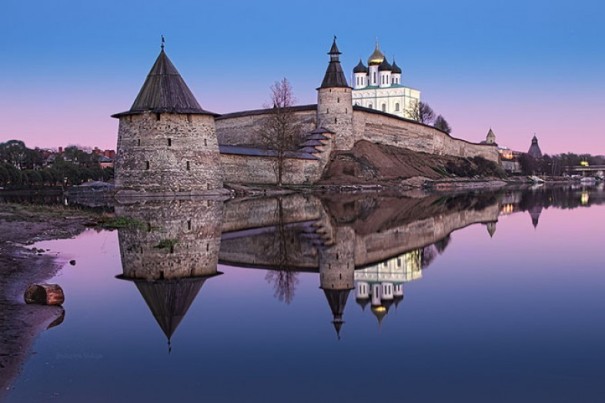 Pskov region is situated in the northwestern part of the European Russia. The area comes to 55.3 thousand square kilometers. This place is the only Russian region, which borders on three foregin states at the same time (Estonia, Latvia, Republic of Belarus). The poulation is about 736 thousand people.

Pskov preserves much of its medieval walls, built from the 13th century on. Its medieval citadel is called either the Krom or the Kremlin. Within its walls rises the 256-foot (78 m)-tall Trinity Cathedral, founded in 1138 and rebuilt in the 1690s. The cathedral contains the tombs of saint princes Vsevolod (died in 1138) and Dovmont (died in 1299). Other ancient cathedrals adorn the Mirozhsky Monastery (completed by 1152), famous for its 12th-century frescoes, St. John's (completed by 1243), and the Snetogorsky monastery (built in 1310 and stucco-painted in 1313).

Pskov is exceedingly rich in tiny, squat, picturesque churches, dating mainly from the 15th and the 16th centuries. There are many dozens of them, the most notable being St. Basil's on the Hill (1413), St. Kozma and Demian's near the Bridge (1463), St. George's from the Downhill (1494), Assumption from the Ferryside (1444, 1521), and St. Nicholas' from Usokha (1536). The 17th-century residential architecture is represented by merchant mansions, such as the Salt House, the Pogankin Palace, and the Trubinsky mansion.